After a year of difficult negotiations and over a month on the picket lines, healthcare workers - including nurses, aides, technicians, dietary, and environmental workers - at Catholic Health’s Mercy, St. Joseph’s, and Kenmore Mercy Hospitals voted overwhelmingly to ratify their new contract, with 94% Yes votes.

While CWA Local 1133 and 1168 members at all three facilities were in negotiations together, no strike clauses at Kenmore Mercy Hospital and St. Joseph’s Campus meant that only the 2,000 CWA 1133 members at Mercy Hospital in South Buffalo were able to strike. On October 1st, Mercy Hospital workers walked off the job, leaving the hospital at 6am to join thousands of their CWA sisters and brothers and other labor, community, and political supporters outside. From then on, CWAers maintained strong picket lines daily at the hospital as well as at the Mercy Ambulatory Care Center, an offsite location twenty minutes away.

CWA members walked the picket lines in the heat and through rainstorms, persisted even as temperatures dropped and snow began falling, to fight for enforceable worker-to-patient ratios that would make the hospital safer and market-competitive wages to attract and retain staff. They stood toe-to-toe with scabs trying to take their jobs and intimidate picketers, spoke with elected officials, and told their stories again and again to the media to bring attention to the healthcare situation in Buffalo - one that’s become common throughout the country. 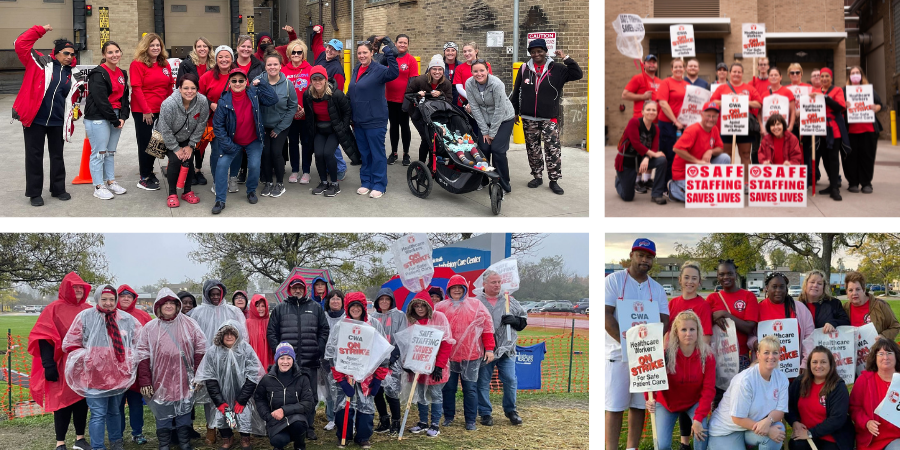 On November 5th, after 34 days on strike, the CWA Bargaining Team came to a tentative agreement with Catholic Health on a groundbreaking contract that raises the bar for healthcare workers across the country. The new contract, covering workers at all three Catholic Health hospitals, includes across the board wage increases with no worker starting below $15/hr, a historic breakthrough in staffing ratios that makes it safer for the workers and improves quality of care for patients, and no concessions on healthcare and pension plans.

“We are very pleased with the tentative contract agreement we have reached with Catholic Health System. We have stressed from day one that frontline workers’ overriding concerns are sufficient staffing to ensure high-quality patient care, and a compensation package adequate to allow Catholic Health to attract and retain the staff needed to obtain staffing improvements. This contract achieves those major objectives, with historic breakthroughs in guaranteed safe staffing ratios, substantial across the board wage increases, including bringing all workers above $15 an hour, and preserving health and retirement plans intact. Hundreds of new workers will be hired under this agreement to remedy dire staffing shortages.

Our members, the frontline nurses, technical, service and clerical workers at Catholic Health, made incredible sacrifices over the last five weeks to stand up for high quality patient care in Buffalo, and this tentative agreement is a tremendous victory that sets new standards in care for the region. We salute the determination and fighting spirit of our members, whose commitment has produced an outcome that will be completely transformative for patients, workers and the Buffalo community.” 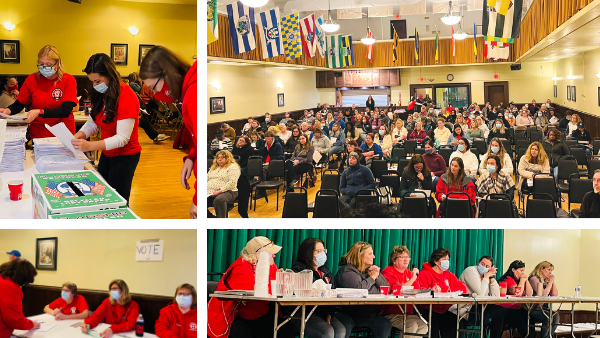 Between November 6th and 8th Catholic Health workers met with the Bargaining Team to go over the TA and ask questions, and voting was completed on November 8th with 94% voting in favor of the new contract.

On November 10th at 7am, workers walked together back into the hospital.

“Going on strike was the hardest thing I’ve ever done, but my coworkers and I did it because we owed it to our patients,” said Jennifer Williams, charge nurse at Mercy Hospital. “We knew that if we stuck together in our union family, it was possible to win a contract that treats both healthcare heroes and our patients fairly. We stood strong in our demands because we knew we were standing up for our patients and the kind of care they deserve from us, and we know it was the right thing to do because throughout this entire strike, we have seen nothing but steadfast support from our patients, community, elected officials and union brothers and sisters across the state and country. I want to thank everyone who joined us on the picket line and supported us in a myriad of other ways.”

Click here to read more about this historic victory!