The budget, finalized and voted on on April 9th, includes:

1. High-Quality Broadband and Good Jobs in the Industry - NYS is getting $1.6 Billion in State and Federal funding for broadband work. We fought to ensure this funding has strong labor labor standards, including:

2. Funding Hospitals & Supporting Healthcare Workers - Billions of dollars for financially distressed hospitals. We'll need to keep pushing to ensure the hospitals in which our members work get a fair share of this funding!

3. Funding the CUNY School of Labor & Urban Studies - The school is dedicated to expanding higher education opportunities for workers and developing the next generation of labor and community leaders.

These were some of our biggest budget priorities, and we wouldn't have accomplished any of them without months of hard work by CWAers throughout New York!

Connecticut State Senate Backs Bill Banning Anti-Union “Captive Audience Meetings”: The Connecticut State Senate gave bipartisan approval on Thursday to legislation that would make it illegal for employers to force workers to take part in anti-union “captive audience meetings. The bill would give workers the right to leave a meeting and return to work when the subject of the meeting is about the employers’ position on politics, religion, or union organizing.

Local 1298 members have fought for legislation banning captive audience meetings for years, submitting testimony to the Connecticut Legislature about the grave impact of these meetings on workers’ rights and union organizing efforts.

Captive audience meetings are a common union-busting tactic by employers, used to intimidate or outright threaten workers into supporting a political candidate or voting against forming a union. Currently, refusing to attend or speaking out during a captive audience meeting puts workers at risk for termination.

The bill is now moving to the Connecticut House of Representatives for a vote. If passed, Connecticut will become the second state in the country to ban captive audience meetings.

Build Broadband Better Town Hall:The federal infrastructure bill will provide billions of dollars for broadband buildout - but how that money is spent is up to state legislatures.

On March 24th Nick Hoh (Local 1104), Tom Roulley (Local 1122), Kim Edwards (Local 1298), and Joe Tarulli (Local 1102) led an excellent Virtual Town Hall to discuss the challenges and opportunities we’re facing and our fight for strong labor standards that will ensure broadband is built by well trained union workers. We also learned more about the CWA Political Action Fund and how our members’ contributions lead directly to huge victories for workers.

CWA District 1 Vice President Dennis Trainor kicked off members from District 1, saying, “This is a once-in-a-lifetime opportunity that could mean more work for our members and a major investment in our future. Thanks to the hard work of you, our members, the federal infrastructure bill included over $65 billion dedicated to broadband. We need to make sure this money goes to our union employers who can get the job done right.”

Over 100 CWAers from District 1 - as well as several from other CWA Districts throughout the country - joined the call to learn more about our campaign to build broadband better, and about how to get involved. 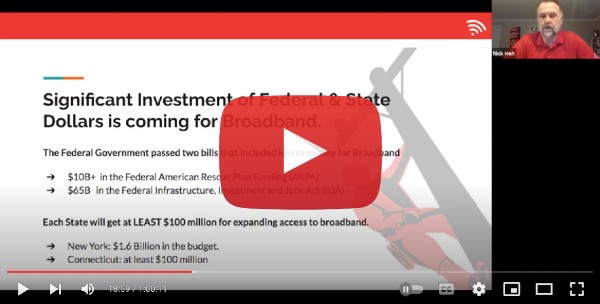 Press Conference For Broadband Legislation In New York: On March 29th CWA Local 1118 joined NYS Senator Sean Ryan and Assemblymember Nily Rozic on the steps of the New York Capitol in Albany to call for strong labor standards attached to any public funding for broadband work. Assemblymember Amy Paulin also spoke, as well as representatives from AARP and Citizen Action NY, to speak about the need for quality broadband for all New Yorkers.

"If the pandemic has taught us anything, it's that high-speed, reliable broadband is essential to daily life in NY. Adding labor and quality standards are essential in providing broadband service to all consumers." - AM Nily Rozic

“We’ve seen directly the digital divide - how substandard broadband service impacts communities throughout New York State. Our workforce is the most highly competent, skilled workforce in the world to maintain and build these networks. We urge the Senate, we urge the Assembly to demand these standards in the new budget.” - John Van Denburgh III 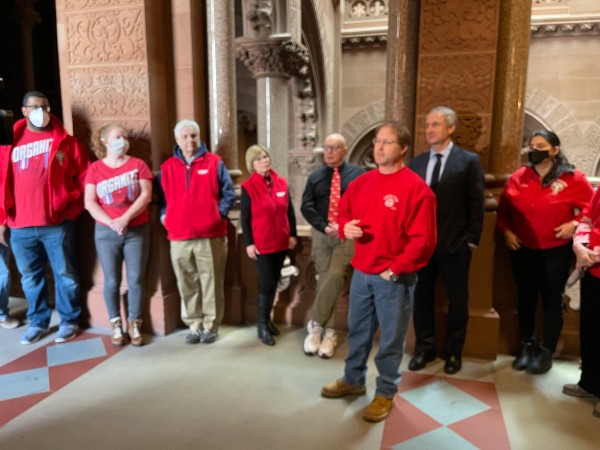 Op-Ed by District 1 VP Dennis Trainor: “Broadband network should be built by union workers”: "We cannot cut a blank check and trust the work will get done efficiently. It is on the state to make sure that the significant public funding proposed in the FY2023 budget comes with the right protections attached to ensure high-quality networks to deliver high-speed, reliable broadband and good jobs in the industry. Let’s make sure this money is put to good use so all New Yorkers get connected."