Huge Victory for Amazon Workers, and the Labor World!

After pouring more than $4.3 million into union-busting efforts over the past year, Amazon executives may have been hoping that the news out of Staten Island on April 1st was just an April Fool’s joke - instead, the year-long effort by Amazon warehouse workers became a reality, as the workers voted 2,654 to 2,131 to form a union - the Amazon Labor Union - the first by Amazon workers in the country!

Chris Smalls, a central leader in the organizing campaign, was fired from the Staten Island warehouse - known as JFK8 - in 2020 after organizing a protest to call attention to the dangerous conditions workers were forced to work through as the COVID-19 pandemic swept through New York City. He spent the next year organizing the warehouse and joined other workers to have worker-to-worker conversations, hold job actions, and gather support from the labor-strong community throughout Staten Island. 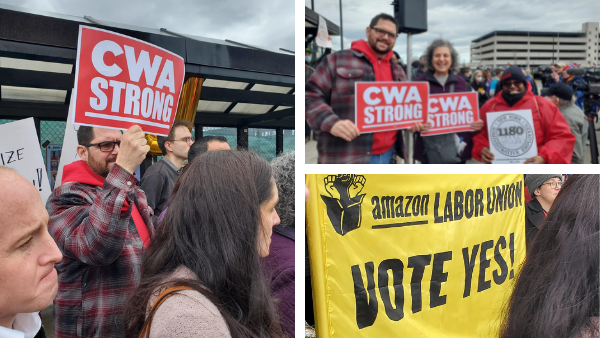 CWA Locals 1102 and 1180 and CWA Retirees turned out in force to support the Amazon Labor Union, including most recently at a pre-vote rally on March 21st to show Amazon workers the power and solidarity of the labor community.

CWA members from Locals 1101, 1102, 1180, and 1101 Retirees turned out again over the weekend to support workers at a second Amazon warehouse on Staten Island, known as LDJ5. They were joined by a huge mass of other unions and community groups, as well as elected leaders including U.S. Senator Bernie Sanders, U.S. Representative Alexandria Ocasio-Cortez, and NYC Comptroller Brad Lander.

Local 1102 members have also provided support and assistance to the Amazon workers throughout both organizing campaigns, including phonebanking over the past week to speak with Amazon workers at LDJ5.

"We got emails from Walmart, we got emails from Target, Dollar General, from Apple, from Starbucks, said Chris Smalls. “We are going to take over the country. The workers are. This is just the beginning. Stay tuned."

​Read more about the Amazon workers' organizing efforts and their hard road ahead in this article by former CWA District 1 Counsel Gabrielle Semel​.