Negotiations are heating up! On Wednesday, August 25th, following two days in a row of bargaining with Catholic Health Services, members of CWA Locals 1133 and 1168 came out in force for an Informational Picket at Mercy Hospital in Buffalo. The contract expired June 30, 2021, with a mandatory 90-day "cooling off period" that will end on September 30.

“I’ve been here for over 30 years,” said Sharon Scime, a registered nurse. “I came here because it’s a small community hospital. And my heart’s in it. I want to give the best I can. And now I go home defeated, because I know I can’t do what I was meant to do.”

Despite heroic efforts over the past 18 months to care for patients and keep Buffalo, NY going throughout the COVID-19 pandemic, healthcare workers—including registered nurses, technical employees, and service employees—have been disrespected by the hospital management, with poor equipment and long hours due to understaffing. Catholic Health has proposed a mere 1% in salary increases for the workers, lower than the rate of inflation and amounting to a 6.5% to 10% pay cut for most workers considering the massive proposed increase in out-of- pocket healthcare costs. Meanwhile, the hospital system’s CEO brings in $1.4 million per year, while the top 11 administrators made more than $7 million combined in 2019.

“We actually cut towels to make washcloths, so we can wash our people,” said Corrine Webb, a registered nurse. “We’ve been out of needles. “I have no urinals, we are searching from floor to floor.” 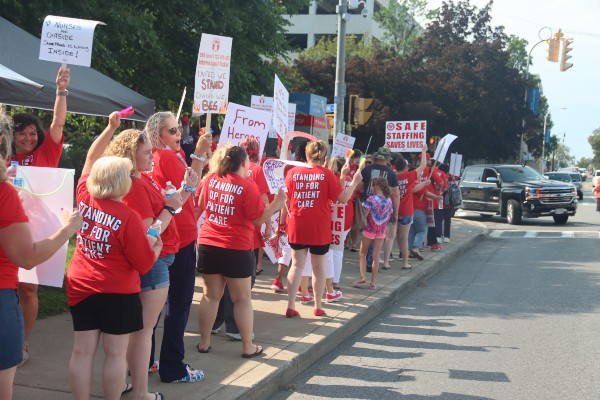 The energy was high on Wednesday during the picket, with many CWAers fired up and ready to keep fighting as long as it takes to win a fair contract. The “Safe Staffing Saves Lives” chants were accompanied by the near constant honking of car horns as supportive community members drove by.

Sign the petition to tell Catholic Health to respect their workers and settle a fair contract now.

Are you a CWA member at Mercy, St. Josephs, or Kenmore Hospitals?

Read more about what our Catholic Health members are fighting for in this op-ed by Heather Lawrence.